Last year, I made it my New Year’s Resolution to sew at least three costumes. Technically I speaking, I ended the year with five new costumes: three sewn for myself, one store assembled, and one sewn for my roommate. Personally, I’m not as happy with my performance. I tend to procrastinate and leave a majority of my sewing until the 11th hour, when panic sets in and the stress causes my hair to fall out.

Here is what I accomplished last year and a few of my thoughts and plans for each. As I get a chance to shoot (some of) these costumes, I’ll go into more detail about their construction and how I put them all together.

I created an Amora costume to round out the Asgardian group with my cosplay trio, Dancing Raptor. I debuted it at Wondercon after some very last-minute hotel room sewing and painting (the helmet was 3D printed for me). Something about wearing a bustier, a giant blonde wig, and four inch platforms is really addicting. I fully plan on wearing this again and redoing the ill-fitting bra cups and stomping around like a sexy Asgardian again.

Also debuting at Wondercon, the Black Canary costume was an impressive feat of shopping. Dasha (Catwoman) drunkly decided to do these costumes a month early and I promptly forgot about it. Instead of crafting an entirely new costume at the same time I was trying to finish Amora, I purchased the entire costume (minus shoes) from the mall for under $25. I definitely want to do more Bombshell cosplay and I’d love to do an appropriate wig. 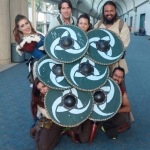 My friends crafted beautiful circle shields and I needed an outfit to go with it. This costume is my first priority  to get good photographs of and to do a full write up. The base dress was originally meant to be a Merida cosplay, but I lost that momentum. Although it’s a little warm to wear during San Diego summer, I love the layered effect and it’s (usually) very comfortable!

What do you do when your roommate wants something to wear at ComicCon, but she just moved so she doesn’t have costumes to wear? You sew a cocktail dress with a plunging necklace out of scrap fabric and trim in one evening. One evening. I’m bummed that the only picture I have is this selfie, but I promise to take more soon.

Oh Halloween. Something about dressing just to party with friends make costuming harder than a convention! My friend said threw together an Adventure Time group and I did a very casual Princess Bubblegum (with her ponytail).  I don’t have any pictures turned of my costume that I like, but I guess that’s the upside and downside of Halloween!

Hopefully for next year, I’ll have blog posts to link back to instead of having to write something so long again. Next week, I’ll lay out what my plans for this year will be!. Thanks for letting me ramble!