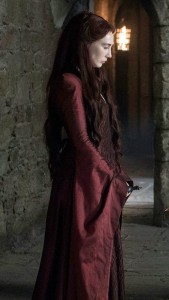 I said I wouldn’t go backwards, but I had to talk a little bit about my current project. A friend of mine, who seems to collect friends who cosplay Game of Thrones characters, has been pushing me to create a Melisandre for a while now and I’ve been putting it off for no good reason. In an attempt to ignore that my lease was ending and that I would soon have to move, I decided to start this project one month before I had to leave my apartment. My goal was to construct the base dress before I moved, which grew into a bigger project than expected.

Brace yourselves for some poor quality mirror selfies. This is your final warning.

Like all good cosplay projects, this one started with multiple trips to different fabric stores to find a textured, dark-red fabric for the base dress, which did not exist.  One local fabric store had in a stock a medium-weight linen with a swirly, embroidery-like texture to it, perfect but for the color. I had has some success dying fabric and in the past, but never had the chance to try it on a larger scale. I also had been looking for an excuse to try using my washing machine to dye fabric. Since my landlord was hellbent on finding anything wrong and I was not relying on ever seeing my security deposit again, it seemed like as good a time as any to risk it all for the Lord of Light. 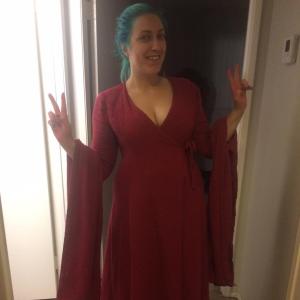 I used RIT All Purpose Liquid Dye: two parts Wine, one part Cherry red. The instructions and video on RITs website are incredibly simple to follow, although nothing could calm my nerves while I waited for the fabric to dry. I did assemble the garment before I dyed it because I was unsure at first if I would have enough fabric (I bought the last of the bolt and hoped for a miracle)

While the picture to the left mostly shows how horrible my apartment lighting was, the picture below really shows the color I was able to achieve. I absolutely love how the dye accented the texture of the fabric, giving it a more-wintery look. I may go back for a second round of dying to potentially darken the red, going for a more of a season six look, but it all depends on how the final look photographs. 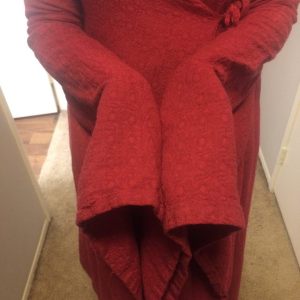 My next steps are to construct the necklace and to keep my eyes peeled for a good fabric to make Melisandre’s luxurious wrap cape. And I’m currently on the hunt for a lacefront wig since I’m unlikely to go back to red any time soon and Westeros hates bangs. When the ensemble is done, I will probably do a final construction post that covers the pattern altering that was done as well as the prop-making process (especially since Lily wants to attempt to lasercut the necklace). Although I’m not sure which day, this piece will debut at San Diego Comic-Con this summer. Between this and my Viking dress, I really seem to be doubling down on the idea of winter costumes for a summer convention. What can I say? I’m a masochist.

One thought on “Spin Cycle Me Rght Round”

There was an error retrieving images from Instagram. An attempt will be remade in a few minutes.

There was an error retrieving images from Instagram. An attempt will be remade in a few minutes.