Having not updated my Ren Faire garb since I was in high school, I have been severely lacking in early-European, historically-inspired outfits. That grungy aesthetic always calls to me, especially when you throw into the mix a reason to layer mismatched pieces and remove the need to smile for pictures. For San Diego Comic-Con 2016, my squad got our shield wall (and “SHIIEEELDD WAAAALLLL” cries) going for a Vikings group (inspired by the History Channel show that we are all obsessed with) that left us all exhausted and hoarse. But cosplayers are rarely happy with the first iteration of their costumer… 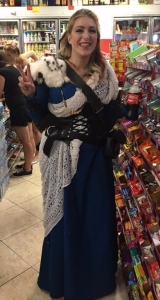 The base dress for this shield-maiden outfit was originally meant to be a Merida cosplay. Back when I was rocking bright orange hair, I figured I could tightly curl my and hair go without a wig. I lost interest and never had quite enough fabric, so the cut out dress sat in a box for almost a year before being re-purposed here. The corset, belt, and bracers were leftover from my Ren Faire days and the shield was crafted by my cosplay partners at Dancing Raptor (and yes, they made everyone’s shields). The drape is just extra fabric that my roommate made look fancy. The fur pauldrons are sewn on and are sadly real: they were given to me by a friend years ago and had been purchase over a decade before I ever received them. I swear on my life that I would not have purchased those furs on my own, but I would much rather give them a glorious second life. Anyways, as complete as the outfit looked, it never quite felt right.

Sadly, this picture (taken by an old friend I ran into at the liquor store) is the only one I have that shows the head-to-toe effect. What doesn’t even begin to photograph is the tiny hand stitches that I used to finish the neckline and the hem. Nothing says, “I spent hours on this costume,” like little details that no one can see! So my current project, especially while my major equipment is packed away, it to go back and upgrade my embroidery. Below is a before-and-after of the neckline with the new stitching.

My next steps are to continue with the embroidery, fixing the hemline next. After that, I’d love to experiment with other stitches to create a more elaborate look and to hopefully post a tutorial of some of my favorites. I hope to experiment with some prop-making, as no good shield-maiden would charge into battle without a weapon. And finally, either at this upcoming Comic-Con or on my own, I need to get good photographs of this dress (and of all my cosplays, to be quite frank).

Comment below if anyone has links to great historical embroidery. This has been an incredibly therapeutic way to unwind from work. I look forward to showing off the updated version of this costume at San Diego Comic-Con 2017 when I am reunited with my fierce Viking clan!

One thought on “A Sttch in Time”